** If you can hear someone talking while you’re reading or writing, your productivity dips by up to 66%.
** The average noise level in many classrooms is not just associated with impaired learning — but with permanent hearing loss.
** A 20 decibel increase in aircraft noise is enough to delay a student’s reading level by up to 8 months.
** 50% of teachers have experienced damage to their voice from talking over classroom noise.

“The third way in which sound affects you is cognitively. You can’t understand two people talking at once (“If you’re listening to this version of”) (“me you’re on the wrong track.”) or in this case one person talking twice. Try and listen to the other one. (“You have to choose which me you’re going to listen to.”)

We have a very small amount of bandwidth for processing auditory input, which is why noise like this — (Office noise) — is extremely damaging for productivity.”

“On Friday, April 19, E.L. Konigsburg passed away at 83, just one year older than Mrs. Basil E. Frankweiler, the eccentric a narrator of her Newbery Medal winning novel From the Mixed-Up Files of Mrs. Bail E. Frankweiler.”

“Konigsburg was only one of five authors to have won the Newbery Medal — the most prestigious award in children’s literature — twice. She was the only one to win it the same year, 1968, when she also won the Newbery honor;  with her Jennifer, Hecate, Macbeth, William McKinley and Me, Elizabeth bested by her From the Mixed-Up Files of Mrs. Basil E. Frankweiler.”

“Elaine Lobl Konigsburg was trained as a chemist, but she found her true calling as a literary alchemist, mixing humor, mystery and pragmatism to create such classic children’s novels as From the Mixed-up Files of Mrs. Basil E. Frankweiler and The View from Saturday.”

“Let’s start with a question from a standardized test: ‘How would the world be different if we all had a third eye in the back of our heads?’
So why bother measuring creativity?
Torrance set out to . . . prove that creativity was as important as intelligence, not just in the arts, but in every field.
Catterall says they made an interesting discovery while they were testing out their survey: Elementary school kids scored better on it than high school kids did. ‘I think the expression that many people use is that the schools have a tendency to suck the creativity out of kids over time,’ he says.”
Full article: http://www.npr.org/2013/04/17/177040995/more-than-50-years-of-putting-kids-creativity-to-the-test

“It usually makes parents proud when their children reach a developmental milestone ahead of other kids. But when it comes to intelligence, researchers say, the smartest children appear to have brains that develop later.

‘What you would do is advise teachers, parents and everyone else to produce as stimulating a social and linguistic environment as possible,’he says.

That can be especially difficult for children who are extremely intelligent. Studies suggest that talented and gifted kids are more likely to drop out of school because of boredom.”

We’re off to the Man with Red Eyes 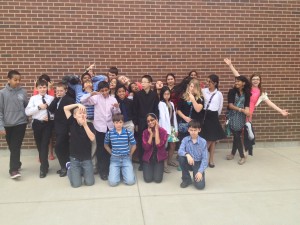 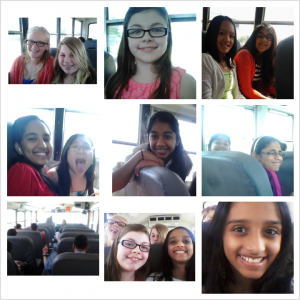 “Evidence Lost: We’re Not Likely to See Editing Like Proust’s in the Future”

One page from the notebooks of Marcel Proust shows the extreme work that went into writing his masterpiece In Search of Lost Time
REBECCA J. ROSENMAR 29 2013, 1:14 PM ET 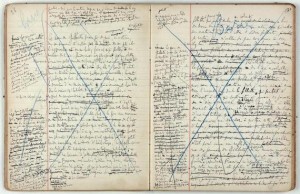 Bibliotheque nationale de France (click to expand)
“This image comes from the notebooks of Marcel Proust, one page among the thousands that would eventually become In Search of Lost Time. Though there are a few sections in his manuscripts that seem to have come out more or less as the author had hoped (see here for example), many, many more display whole passages discarded or rewritten like you see one the pages above.

At first, the aggressive self-editing gives you pause: Man, Proust was hard on himself! We are not used to seeing the trail of the hard work that goes into making a beautiful book or essay; computers, like word processors before them, have hidden the the physical evidence of this process. In some places you can still catch glimpses of it — the history tab of a Wikipedia page — but mostly, if this trail exists at all it exists in a private file, the track changes of a Microsoft Word document or the revisions history of a Google Doc.

Efforts like Etherpad, which promised to allow real-time collaboration while recording every keystroke of change to a document, show something else too: In our age of networked writing, a tool that records editing history exists for collaboration. This is true of all of the examples I just gave — Wikipedia, Google Docs, Word’s track changes, and Etherpad. Can you imagine tracking the changes of your own edits, just for yourself? Who would do that? If any of these records make it to the future for scholars to examine, they will be the records of our collaborations. The work of an individual’s self-edits will have been scrubbed.

Proust may have been writing In Search of Lost Time, but in the act of doing so he was creating an object that preserved, in a sense, the time he had lost (“lost”) while writing the books.”