I hope you’ve all enjoyed the first weekend of your long-awaited Spring Break. Let’s hope we have some good weather to enjoy our week!

In the meantime, I hope you enjoy the four TED-Ed videos to celebrate International Women’s Day!

Here are some items to help you with your revising and editing:

The concept of a growth mindset is always worth revisiting, especially when we encounter new learning challenges.

As a teacher, I’ve relied the most on two books: Eudora Welty’s One Writer’s Beginnings and Stephen King’s On Writing: A Memoir of the Craft. I’m posting excerpts from an interview with King wherein he shares his thoughts on teaching writing to teen-agers (middle-schoolers).

Lahey: If your writing had not panned out, do you think you would have continued teaching?

King: Yes, but I would have gotten a degree in elementary ed. I was discussing that with my wife just before I broke through with Carrie. Here’s the flat, sad truth: By the time they get to high school, a lot of these kids have already closed their minds to what we love. I wanted to get to them while they were still wide open. Teenagers are wonderful, beautiful freethinkers at the best of times. At the worst, it’s like beating your fists on a brick wall. Also, they’re so preoccupied with their hormones it’s often hard to get their attention.

Lahey: You write, “One either absorbs the grammatical principles of one’s native language in conversation and in reading or one does not.” If this is true, why teach grammar in school at all? Why bother to name the parts?

King: When we name the parts, we take away the mystery and turn writing into a problem that can be solved. I used to tell them that if you could put together a model car or assemble a piece of furniture from directions, you could write a sentence. Reading is the key, though. A kid who grows up hearing “It don’t matter to me” can only learn doesn’t if he/she reads it over and over again.

Lahey: In the introduction to Strunk and White’s The Elements of Style, E.B. White recounts William Strunk’s instruction to “omit needless words.” While your books are voluminous, your writing remains concise. How do you decide which words are unnecessary and which words are required for the telling?

King: It’s what you hear in your head, but it’s never right the first time. So you have to rewrite it and revise it. My rule of thumb is that a short story of 3,000 words should be rewritten down to 2,500. It’s not always true, but mostly it is. You need to take out the stuff that’s just sitting there and doing nothing. No slackers allowed! All meat, no filler!

Lahey: By extension, how can writing teachers help students recognize which words are required in their own writing?

King: Always ask the student writer, “What do you want to say?” Every sentence that answers that question is part of the essay or story. Every sentence that does not needs to go. I don’t think it’s the words per se, it’s the sentences. I used to give them a choice, sometimes: either write 400 words on “My Mother is Horrible” or “My Mother is Wonderful.” Make every sentence about your choice. That means leaving your dad and your snotty little brother out of it.

Lahey: Great writing often resides in the sweet spot between grammatical mastery and the careful bending of rules. How do you know when students are ready to start bending? When should a teacher put away his red pen and let those modifiers dangle?

King: I think you have to make sure they know what they’re doing with those danglers, those fragmentary and run-on sentences, those sudden digressions. If you can get a satisfactory answer to “Why did you write it this way?” they’re fine. And—come on, Teach—you know when it’s on purpose, don’t you? Fess up to your Uncle Stevie!

You all know that one of the best days in G/T has been our day excursions to TEDxKids. I know that you all have super ideas and stories to share, so here’s an opportunity for a “pursuit”.

Copy and paste.
This form of plagiarism is very popular because students seem to feel that if they use several different sources for their copying, they are less likely to be caught.

Not citing a source.
Any ideas or material you use from another source must be documented or cited. This includes summaries written in your own words. If the ideas are not yours, you must cite the source(s).

Borrowed or not?
Sometimes in the note taking process, a writer will forget to indicate what the origin of an idea is.  Perhaps this is because the idea from the source is close to the writer’s own ideas. You must give credit for ideas borrowed from your sources.

OTHER ERRORS AND ABUSE OF SOURCES.
Inaccuracy
Inaccurate paraphrasing of source material can be a major problem especially for inexperienced researchers.  Be certain that your paraphrase accurately reflects what the original source means.  Another error is the misapplication of quotations. This error may be caused by the researcher not understanding the material in the source, or by “forcing” a quotation in a paper where is does not fit.

Taking material out of context
People in the political arena are particularly bad about using this “technique.”  When you take an idea, phrase, or quotation out of its original context [the surrounding words that give meaning to the idea] and place it into you work, you may change the meaning of the original.

Overuse of sources.
1.    Stringing together quotations and / or ideas from your sources produces very poor papers. In fact you will usually fail a paper put together this way because you really haven’t written much yourself.
2.    When you rely on too few sources or depend on a single source for the bulk of the information in your paper, you really haven’t done much in the way of research.

Broad citations.
Citations should appear as near to the cited material as possible. In other words, don’t place a citation at the end of a paragraph [or string of sentences] unless the reference is only for that last sentence.

We all “fail” at something. Just remember: That is how we learn and grow and become the person we are meant to be. 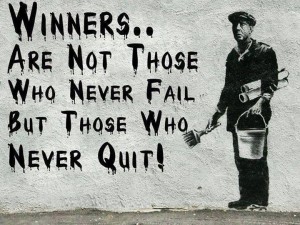 Read this interesting article about how you approach your homework and how that ties in to your personality types:  http://educationaladvancement.wordpress.com/2013/09/24/doing-homework-the-wrong-way/.

Traditional Frayer Model that can be used in most disciplines. 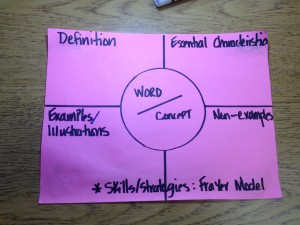 Frayer Model adapted to use as a study method for your Yellow List Stems and Vocabulary. 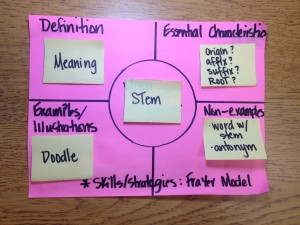 The Creativity Network is requesting submissions for the pre-conference newsletter. Book reviews, articles, and a new Student Corner – submissions of stories, poems, artwork – anything by students!

If you would like to submit an item for the newsletter, please send it to editors Patti & Rick Shade at patti.shade@gmail.com no later than September 13.